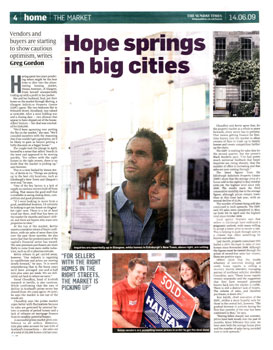 Edinburgh’s leading property solicitor has been celebrating another major piece of national press coverage after being featured in the Sunday Times.

Warners were highlighted in the national newspaper’s property supplement – Sunday Times Home – in a story about how house prices were starting to chance across Scotland.

The paper said that Warners was experiencing a “pragmatic” scenario among buyers and sellers in Edinburgh – with sellers now willing to accept lower offers for their properties. It added that this was helping to drive the number of sales up in the city, which was a promising development for the property market.

The full story appeared in the Sunday Times and came as the result of a pro-active media strategy by Holyrood PR PR in Scotland.