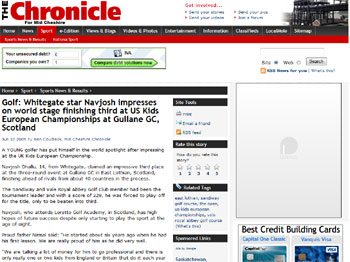 A leading newspaper in Cheshire has run a high profile feature on the U.S. Kids Golf European Championship – bringing more PR success to the prestigious event.

The Mid Cheshire Chronicle reported on how young golfing prodigy Navjosh Dhallu had beaten youngsters from around the world to seal the coveted third place slot at the tournament, which is regarded as the equivalent of the Open Championship for kids.

The tournament was staged last month across five historic courses in East Lothian and saw 430 kids from 34 countries competing for the title. Young golfers from around the world were split into age and gender categories and played on shortened courses to determine who would triumph and win places at the World Championships in Pinehurst, USA, later this year.

The full coverage appeared in the Mid Cheshire Chronicle and came as the result of a pro-active media campaign by Holyrood PR PR in Scotland.