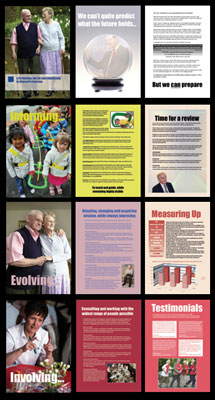 Holyrood PR has successfully retained the contract to provide press and media services to the Care Commission, the government organisation which is responsible of regulating and improving the quality of care in Scotland.

As the incumbent Holyrood PR had handled the contract for the previous three years. The Edinburgh-based PR and media relations specialist was invited to take part in an open tender to appoint an agency to manage the contract throught to 2011.

After winning a place on the short list Holyrood PR then went head-to-head with three other PR agencies in a final presentation to a panel made up of senior executives with the regulator, including Chief Executive Jacquie Roberts and Convener, Professor Frank Clark.

The Care Commission said Holyrood PR was the unanimous choice of the panel, with particular praise being made of the agency’s continued energy and enthusiasm it had demonstrated for working on the account.

Co-Director Raymond Notarangelo said: “This really is a superb result for Holyrood PR. We were told that the Care Commission had evaluated the tenders on a strict scoring matrix – and that we have beaten our rivals hands-down.

“We were up against some pretty big guns on the PR scene, so for Holyrood PR to win the account is a huge tribute to the excellent work we have done to date and the creativity and commitment we had demonstrated to handle the contract over what will be a crucial period for the Care Commission.”

Fellow Director Scott Douglas added: “We take nothing for granted in any aspect of our work. We approached this as if it was a brand new client so that we could give the pitch every ounce of our energy and creativity, which we believe shone through from the proposal document (pictured) through to the final presentation.

“Ultimately though we are all about results and we’d proven that during more than 3000 hours serving the Care Commision with distinction. It is our exacting standards, our willingness to work and the sheer depth of our media experience that won the contract.”

The Care Commission, established in 2002, regulates almost 15,000 care services which provide care to 320,000 people. The organisation is committed to regulating for improvement and developing a care sector that adheres to and exceeds the Scottish Government’s National Care Standards.

Holyrood PR will provide a 24/7 press office function as well as continuing the process of raising awareness of the work of the Care Commission.

However, one of the key challenges will be to manage the major changes which will happen to the organisation. Under the Government’s plans, the work of the Care Commission and the Social Work Inspectorate Agency will go into a new organisation by April 2011 – as part of a wider scheme to improve the role of scrutiny bodies in Scotland.

The Care Commission is currently working with the Scottish Government and other organisations to ensure a smooth transition.