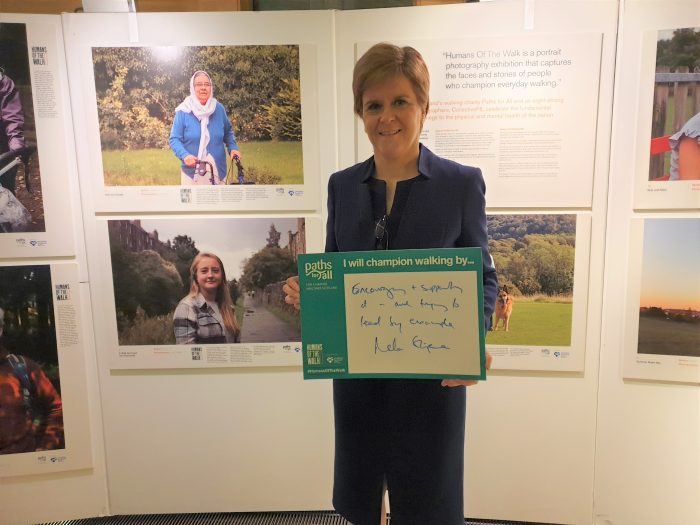 THE FIRST Minister and a host of high-profile politicians have pledged to champion everyday walking – after seeing a powerful photography exhibition about its benefits for ordinary Scots.

Nicola Sturgeon was among dozens of MSPs who backed Scotland’s walking charity Paths for All, after viewing the acclaimed Humans of The Walk exhibition at The Scottish Parliament.

Delighted staff of the charity, which aims to create a happier, healthier and greener nation, say they have been blown away with the positive response from Scotland’s national politicians, many of whom penned supportive messages after viewing the uplifting portraits and their accompanying stories.

The First Minister proudly posed for photographs with her pledge, which read: “I will champion walking by encouraging and supporting it – and trying to lead by example.”

Ian Findlay CBE, Chief Officer at Paths for All, was thrilled when invited to exhibit in the Members’ Lobby from January 21-23 after linking up with a collective of female photographers from Edinburgh College of Art with the simple idea of capturing how walking can improve lives.

The resulting series of portraits celebrates the many ways in which walking benefits physical, mental and social health, regardless of age or ability. Its aim was to inspire the public to fall in love with walking and to incorporate it into everyday life.

Mr Findlay added: “It’s been a truly remarkable opportunity to be able to take the exhibition to the Scottish Parliament and share our messages and initiatives with the country’s leaders.

“Humans of the Walk has been received incredibly well and provoked many important conversations around the benefits of walking. We’ve had great discussions with numerous MSPs on the importance of walking and active travel and how it can positively impact not only the physical and mental health of the nation but also the environment.

“The response has been extremely positive and many of the politicians discussed the different ways in which they can help to encourage people in their own constituencies to walk more.

“We are very grateful to Alison Johnstone MSP for sponsoring the exhibition in the Parliament.” 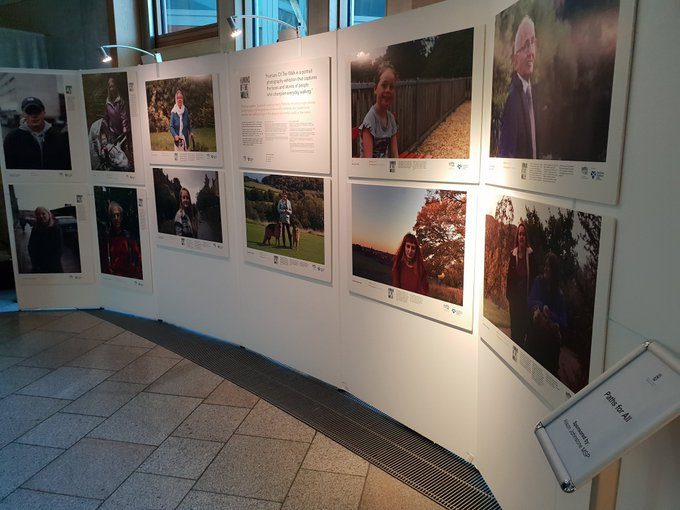 Images captured by the talented young photographers of CollectiveF8 bring to life individual stories of love, strength, friendship and age – all connected by walking. They include a portrait of married couple Karine and Sarah Mather, who shared their story about how getting outdoors helped Karine following her Multiple Sclerosis diagnosis.

Such stories struck a chord with politicians of all parties with dozens of them posing for photos while sharing supportive messages.

Alison Johnstone, MSP for Lothian Scottish Green Party, said: “It’s a privilege hosting an exhibition like Humans of the Walk in Parliament, and even more so working with an organisation like Paths for All who are relentless in their work to share the positive impact and evidence about walking and why it’s so good for all of us.

“In the face of the climate emergency and the obesity epidemic, walking is a sociable, affordable, health-enhancing way to get about.  We can’t take it for granted though, we need to invest in making walking safe and attractive for all”.

Such was the positive reception that the exhibition has now been invited to go on show at the Scottish Government’s Victoria Quay building in Leith next month (Feb).

Ian Findlay added: “What this proves beyond any doubt is that the simple act of walking on a daily basis strikes a very powerful chord even with the most influential people in our society. We are delighted that Humans of the Walk is helping us spread the message far and wide.”

First launched in May 2019, the exhibition was part of the first Open Streets event in Edinburgh – a ground-breaking initiative which saw large parts of the city centre closed to motorised vehicles.

Paths for All’s aim is to significantly increase the number of people who choose to walk in Scotland, whether it’s walking for leisure or walking to work, school or to the shops. The charity works to create more opportunities and better environments not just for walking, but also for cycling and other activities to help make Scotland a more active, more prosperous and greener country.

For more information on Paths for All, visit: https://www.pathsforall.org.uk/

WHY NOT CELEBRATE THE PEOPLE AT THE HEART OF YOUR BUSINESS WITH OUR CHARITY PR EXPERTS?