Pizzeria Pigeons In For Charity 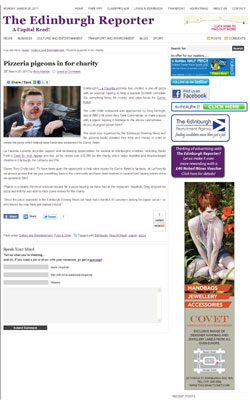 La Favorita has flown in some tasty PR Scotland thanks to an unusual pizza topping as part of Comic Relief’s Do Something Funny For Money campaign.

The pizzeria based on Leith Walk was approached by the Edinburgh Evening News to make a special pigeon pizza as part of a photo call to promote their Comic relief efforts.

As part of the charity campaign, the Edinburgh based paper enlisted Greg McHugh star of BBC Scotland’s hit comedy series Gary Tank Commander to eat a pigeon pizza in homage to the show’s catchphrase ‘Do you do pigeon pizza? Nuh?’ to raise awareness and funds for Comic Relief.

The story, including the pizzeria’s efforts was then picked up by online news site The Edinburgh Reporter who commended the stunt as well as La Favorita’s ongoing committment to raising funds for Radio Forth’s Cash For Kids Appeal.

Tony Crolla, owner of the award winning restaurant quotes in the article: “To have been given this opportunity to raise awareness and money for Comic Relief is fantastic. At La Favorita we always ensure we give something back to the community and have been involved in several fund raising schemes since we opened in 2003.

“Pigeon is probably the most unusual request we’ve had for a pizza topping at the restaurant and since the piece appeared we have had handful of customers asking for pigeon pizza – so who knows we may have started a trend.”

The full article can be viewed on The Edinburgh Reporter’s website and was secured as part of a sustained PR and social media campaign carried out by the Holyrood PR.