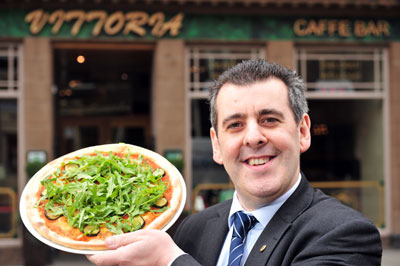 An Italian restaurateur’s innovative drive to become more eco-friendly has seen his three restaurants be served up with a unique set of top environmental awards.

Tony Crolla decided to do his bit for the planet after realising his Edinburgh restaurants were producing sizeable carbon footprints.

He has spent the last 12 months making significant changes to the restaurants’ practices, everything from installing energy-efficient light bulbs to cutting the number of suppliers who make lorry trips to his establishments.

Tony said: “Restaurants are not the obvious places people would think you could become more environmentally friendly – but we’ve proved that wrong.

“Restaurants are hugely wasteful in the way they operate but with the right determination you can bring about change.

“We are now very conscious of the impact each and every area of our business has on the environment.  In fact, we now have a philosophy of ‘whatever leaves the building, is leaving to be recycled’.”

All leftover food is removed by homeless charity Cyrenians who turns it into compost which it sells on to raise funds. In addition, the restaurants all carefully recycle packaging and each have installed energy efficient hand-dryers instead of paper towels.

Tony added: “This all came to me one day when I just decided that I needed to make some changes to make the restaurants more energy efficient.  I sat down and wrote a list of what needed to be done – and just got on with it.

“I’m delighted to receive these awards. While we may also make some financial savings as a result of the measures, this initiative to me this is all about doing the right thing.

“But the best thing about this is that we have created a culture of change that has spread to the staff who not only embrace what we’ve done but who now think about improving the environment in their own lives outside work.”

The Keep Edinburgh Clean Awards are co-ordinated by Edinburgh City Council  to recognise and reward the good work undertaken by businesses and other organisations to make Edinburgh a clean and green city.

Councillor Robert Aldridge, the City of Edinburgh Council’s Environment Leader, said: “This restaurant group has demonstrated how all types of business can make major inroads into reducing their environmental impact.

“What particularly impressed me was the drive to cut down on waste received from suppliers, and thereby influencing far more than just what goes on in the restaurants.

“They have also adopted very good and innovative recycling practices, even recycling food waste through a local charity, all of which are to be commended.

“I’d hope other businesses, particularly those in Edinburgh’s important catering sector, will take a lead from what Mr Crolla has done.”