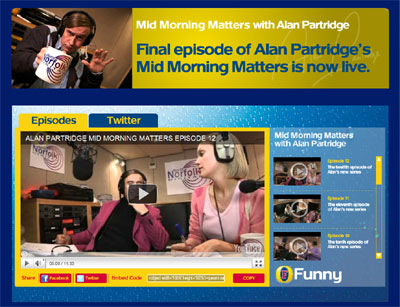 My dream wish could be coming true…the return of Alan Partridge. Steve Coogan is in talks with BBC and other broadcasters to rework his online series – Mid Morning Matters – for television.  The series, which follows Partridge as he records his North Norfolk Digital radio show, has attracted more than four millions views on YouTube.  It would be the first TV appearance for Partridge for nearly a decade.  It all sounds good to me – and all I’d ask is a mini reprise of my favourite scene which has Partridge, at his hapless and ignorant best, ending up repeatedly bellowing ‘Dan’ across a car park to his new best friend from TV who wants nothing to do with him.  Do watch it if you’ve never seen it.

The Apprentice is one of the BBC’s most watched programmes and this series is hotting up as we move into Week 6. It’s so easy to sit at home and say how we would do it differently and watch how the candidates squirm as they’re being grilled by Sir Alan in the boardroom. This article uses examples from the hit show to demonstrate how to be the perfect job candidate so polish your shoes, brush your hair, straighten your tie and listen up, kids.

IT’S LIFE JIM, BUT NOT AS WE KNOW IT (Adrian)

It must be great to be a natural history buff or ecologist – particularly if you’re one of the ones tasked with discovering new species. With millions of animals still waiting to be unearthed, it’s got to be an amazing job going to the extremes of the earth to study weird and wonderful creatures.

The latest discovery made by these scientists, however, isn’t just a new species. Instead, they’ve also discovered the deepest-ever environment to support multi-cellular life.

The boffins were amazed to discover worms living in 48-degree water in South African mines – some 1.3km below the Earth’s crust.  Using ore-mining drills to search through the subterranean world, which is only accessible in a handful of locations in the world, they made the discovery and now believe that the animals originally came from the surface but got washed down into the cracks in the Earth’s crust by ancient rainwater.

It’s good to know that when humanity is wiped out, there’ll still be indestructible worms living deep underground…

One of the world’s leading fashion magazine’s has made their stance on pro-anorexia websites more than clear featuring not one, not two but three plus size beauties on the cover of their latest magazine. Vogue editor Franca Sozzani has been involved in a campaign against pro-anorexia websites, which encourage girls to repress their appetite and risk their lives in order to look stick thin and as part of this has started an online petition. Sozzani is the perfect figure to lead a campaign such as this as the fashion world is often blamed for many cases of anorexia choosing to use size zero models for many of their shoots and walks. The Vogue cover takes an encouraging step forward into a fashion world which promotes healthy body image as rather than hiding their bodies, the three voluptuous lovelies proudly flaunt their curves in sexy lingerie from justemoi.co.uk and they look beautiful, curvy and extremely feminine. Let’s just hope that this isn’t part of some shallow PR stunt in order to increase magazine sales and a sign that plus size models are here to stay.

DO YOU WANT BAIT WITH THAT LOVE? (Pamela)

The world’s first amphibious ice cream van took to the Thames this week in a clever attempt to highlight how vans are being forced off the road due to high fuel prices.  Aptly named the ‘HMS Flake 99’, the yellow van come boat reached a top speed of five knots while blaring Rod Stewart classic ‘We Are Sailing’.  According to this article a number of councils have banned vans from coming into housing estates over concerns of noise pollution.  That’s a far cry from the problems we faced with ice cream wars in Scotland.  We’d have happily settled for the decibel issue.