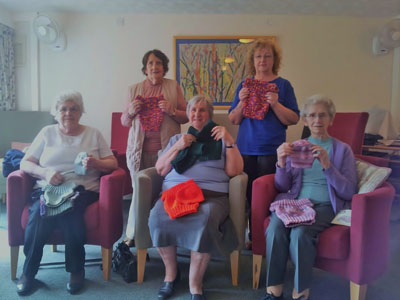 Resident’s plight to help orphaned babies in Africa made headlines on Scottish Housing News this week.

Seven women from Bield’s Gladstone Court heard about a knitting initiative which started in Aberdeenshire, to send beanie hats, blankets and other items to Africa, after it was discovered that babies suffering from aids were being sent home from hospital wrapped in newspaper due to a blanket shortage.

The residents who started a craft club a few months ago decided to knit vests and hats for the new born babies and knitted 46 items in total which have now been sent over.

Kate Clark, a resident at Bield’s Gladstone Court, said: “It was great to take part in the knitting project. We are keen knitters and having something like this to focus on made us concentrate on our skills as well as help to contribute towards a great cause.”

The project received great interest and was supported by the NHS healthy Communities Collaborative which works regularly with the women at Gladstone Court on craft projects as well as the scheme manager for Bield and Bield itself.

Brian Logan, chief executive of Bield, said: “This project typifies our free to be approach which we feel embodies what Bield are all about as an organisation.

“We always encourage our service users to keep as active as possible whilst also maintaining an independent lifestyle.”

Bield is a registered charity which grew from humble beginnings, starting out with one housing development in Bo’ness to become a major of a wide range of housing and services for around 20,000 older people across 22 local authority areas.

This coverage was secured on the Scottish Housing News website on behalf of Bield thanks to an ongoing PR in Scotland campaign with Holyrood PR.