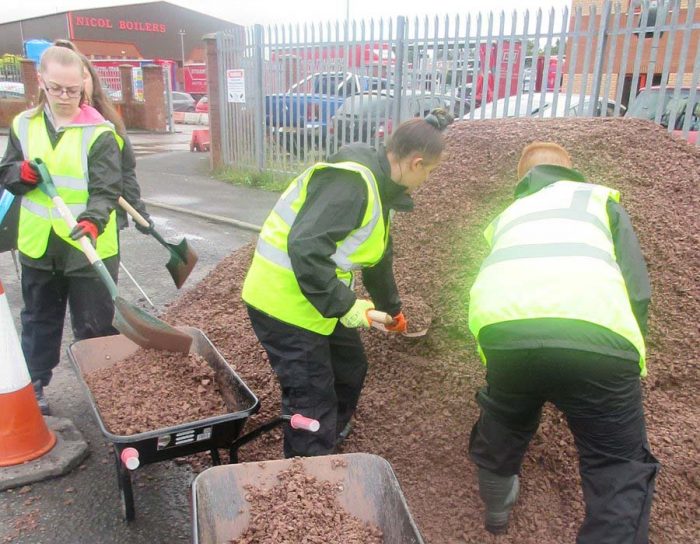 A HIDDEN path in North Lanarkshire has been transformed thanks to a dedicated community group and Scotland’s walking charity.

Local health initiative Getting Better Together worked with a group of pupils from Calderhead High School to resurface 100m of a disused path in Shotts town centre, upgrading it into a safe and welcoming active travel route.

Despite several days of torrential rain the volunteers transported and laid 40 tonnes of path material – that’s 35 cars’ worth.

The group received a Community Active Travel grant of £3000 from Paths for All last year after putting together a successful application which aimed to make the path visible again and easier for residents to walk or cycle on as part of their daily journeys.

The funding, supported by Transport Scotland, was used to buy materials and tools that the pupils used to upgrade the path. The youngsters learned the necessary skills by taking in part in Paths for All’s Path Skillz project.

Kyrstie Connor, a youth worker at Getting Better Together said: “We’ve had such a positive response from the local community who are really enjoying being able to use the path again for walking, running and cycling about Shotts.

“We’re hoping that the reopening of the route will continue to encourage more people to get out and about and leave the car at home.

“I first applied for the grant after seeing it on a Youth Scotland bulletin and shortly after, Paths for All came along and held a course in the school.

“We were in the classroom for the first two days learning how to safely carry out the work, before spending the rest of the week completing the project.

“With help from Paths for All, the pupils have learned some really valuable skills – both practical and theoretical – which I’m sure many of them will build on later in life.”

The group have also installed a signpost to highlight the route to encourage more people to use it for walking and cycling. 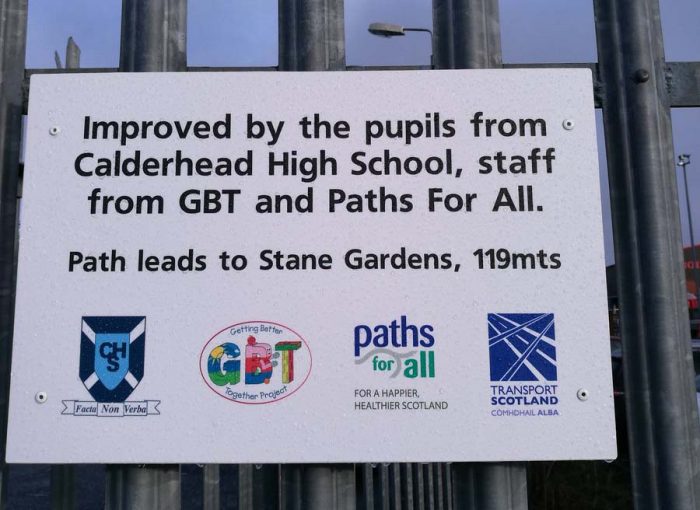 The public is being invited to keep up to date with the improvement work and thank the group for their efforts by using the hashtag #KnowYourRoutes on Twitter.

Ian Findlay, Chief Officer at Paths for All said: “The work that Calderhead High School and Getting Better Together have been doing has far more than local value – it’s work that will have a big impact on improving the physical, mental and social health of our society.

“Paths and parks are so important when it comes to keeping us active, enjoying the outdoors and connecting with nature – not to mention how they benefit the environment and the air we breathe, too.

“But when the lighting is down or when a path has fallen into disrepair, they can often fall out of use.”

The projects will be carried out mainly by volunteers and charities and their work is expected to be finished by early 2019.

Ian added: “We have hundreds of very hardworking volunteers to thank for the great amount of work that will be taking place over the coming months who are dedicated to making sure that Scotland’s land is used sensitively and for the benefit of all.

“Over the years, doing this work, we’ve received very positive feedback from people whose day-to-day lives have improved as a result of these grants.

“We’re excited to see the difference that will be made to paths across Scotland and know that a great number of communities will benefit.”

Do you want to share your story with the help of our Charity PR team?