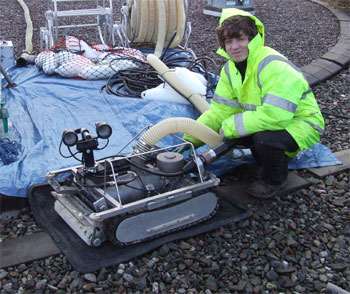 Proud staff at a leading water quality engineering firm have helped to deliver a crucial stage in a major Midlands drinking water project.

The company is one of a handful in the UK with the expertise to clean the hidden structures which deliver safe, clean water to millions of homes and businesses.

The two-and-a-half year Frankley project, which was commissioned by Severn Trent Water, involves the construction of a new Granular Activated Carbon plant , designed to treat and blend water from Trimpley Pumping Station in Worcestershire with Elan Valley water.

Panton McLeod has been involved in the project for the past two years and the company’s work has included: disinfecting water structures on-site using standard chlorine procedures, standard repair work, supervising hygiene levels and cleaning some of the open water tanks on the site.

The firm has also been involved in cleaning and inspecting the new pipelines being installed on the site.

The Frankley scheme is the latest in a series of major water projects that Panton McLeod has been involved with in recent years, which has included playing a vital role in the £120m Katrine Water Project in 2006. The Katrine scheme was the biggest-ever investment carried out by Scottish Water and included the creation of a new filtration plant designed to bring Glasgow’s drinking supplies into the 21st century.

Paul Henderson, operations director with Panton McLeod, said: “The Katrine project was a landmark scheme that we were honoured to play a pivotal role in. It was the biggest project of its kind ever to be carried out by Scottish Water and provided our staff with a big challenge, which they performed with distinction.

“This new project for Severn Trent Water is on the same kind of scale and we’re delighted to be able to offer our expert services and expertise to help the scheme towards completion.

“We’re carrying out a similar role this time as well – as we are helping to inspect and clean the new pipelines that are being installed at the site. These pipes have to meet stringent water quality standards, so we were able to use our innovative technology to ensure that everything was inspected and cleaned to the highest standard.

“It’s an important part of the whole project so we’re very pleased with how the work has gone so far and look forward to seeing the new facility when it has been completed.”

Its services are in demand by some of the biggest water companies in the country, including Severn Trent, Scottish Water, Thames, Northumbrian and Yorkshire.

The firm, which also has bases in Nottingham and the United States, has also pioneered the use of underwater robots which are used to inspect and clean structures used to store potable drinking water across the UK.

The machines remotely operated and fitted with camera and lighting equipment, which allows staff controlling the sub to assess the interior of the tanks. They are also used solely within clean potable water environments and meticulously cleaned and disinfected prior to every use to ensure they can be safely used in the public water supply, and Panton McLeod conducts rigorous tests before and after each inspection.