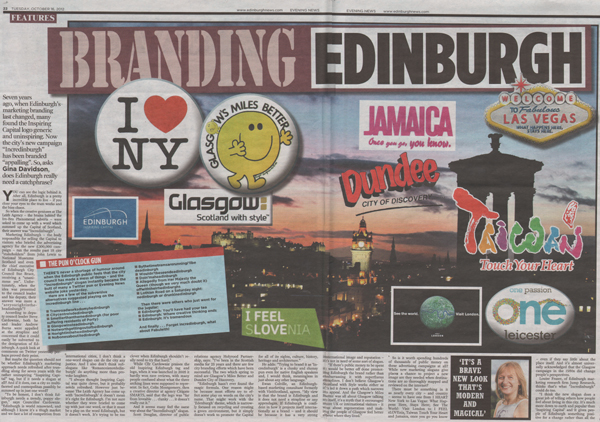 Our director Scott Douglas has an opinion on just about everything…and he certainly had something to say on the re-branding of our Capital city, as ‘Incredinburgh’.

Scott’s PR insight was sought by local paper, the Evening News to comment within an article which sought a variety of expert opinions to debate whether Edinburgh even needs a catchphrase or slogan.

Scott said: “I’ve been in the Scottish media for 25 years and there are few city branding efforts which have been successful. The two which spring to mind are Glasgow’s Miles Better and Dundee City of Discovery.

“Edinburgh hasn’t ever found the magic formula. One reason might be because most efforts try to effect some play on words on the city’s name. That might work with the ‘Edenburgh’ theme, which is narrowly focused on recycling and creating a green environment, but it simply doesn’t work to promote the Capital for all of its sights, culture, history, heritage and architecture.”

He adds: “Trying to brand it as ‘Incredinburgh’ is a clunky and clumsy pun even for native English speakers and, I would think, meaningless in just about any other language.”

What do you think of Incredinburgh? Do you have any suggestions for an alternative?