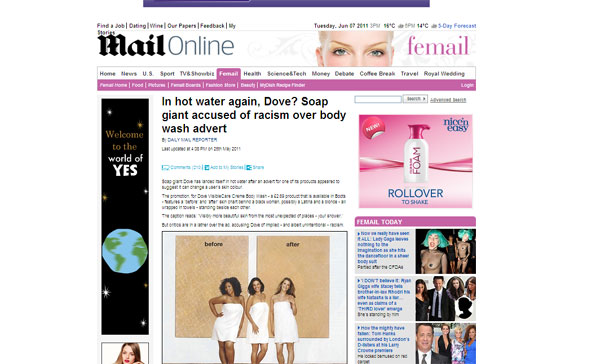 WANT TO SLUM FOR WEB CLICKS? THEN PLAY THE RACE CARD (Scott)

In the US, beauty brand Dove found itself being accused of racism after running an ad with three models – one black, one latina, one white – in front of pictures showing two skin swatches. The swatches were supposed to show how using Dove products for a week could help with dry or flaking skin. However, some commentators suggested the order of the three models – black to white –  implied that using Dove products could help people with darker coloured skin to whiten or lighten it, as if white skin is more desirable. Consumer polls – including one by the Huffington Post – suggested consumers did not actually feel the ad had any racist intent. My own view is that this story was hyped in certain quarters online in a bid to whip up web traffic. Thankfully consumers are more sophisticated than that and Dove’s PR team were measured in their response.

Internationl Air Transport Association (IATA’s) head of security Ken Dunlop has announced plans for the future of airport security which includes a state of the art scanning machine that will scan and assess traveller’s belongings without them having to remove them first. The technology save valuable waiting time and will carry out over 5 different safety checks including, x-rays, metal detection, liquid detection, iris scanning and shoe scanning. As you can see from this promo video it’s pretty clever stuff and would remove the need for timely airport security checks as well as the embarrassing rub down from burly security workers!

One of the biggest scoops currently taking place in the United States is an absolute belter. Mixing social networking site twitter, a respected politician and some “inappropriately lewd” pictures to a 21-year-old student, it’s compelling stuff and easily a worthy runner-up to the ongoing Ryan Giggs revelations as the big scandal of the moment. It involves hilariously-named New York Representative Anthony Weiner, who has been uncovered as a social media sex-pest after taking a picture of his bulging underpants and sending it to a 21-year-old student through the site. It seems like it’s just the tip of the iceberg too, as he’s admitted to inappropriate online sexting with a slew of other young women.It’s a shame really, as Weiner was one of the few people in the House of Representatives that didn’t conform with the usual self-serving U.S. politician mould. His emotional outburst over the Republican Party’s move to turn down healthcare legislation for 9/11 search and rescue teams, in particular, is one of the most brilliant, passionate and pointed attacks I have ever seen. Shame he’s going to be remembered as “that guy who posted a photo of his junk on twitter” now…

Remember the days when you could buy a penny chew, a 5p freddo or perhaps a decent train fair for only a few quid? Prices keep going up and there seems to be no stopping it. Flight costs are no exception – with soaring oil prices and tax rises it is said that by the end of this year passengers could face having to pay up to eight per cent more for fares. Now I’m not very good at maths but I’m sure we can all agree that every penny counts and any increase will affect the most of us. If you’re like me and you like to keep things cheap and cheerful then let’s all keep our fingers crossed – or, for all you jet-setters book a holiday now and save yourself that eight per cent.

THE SICKEST MOVIE EVER? (Laura)

The UK film board has taken an unusual step and refused to classify this year’s movie sequel the Human Centipede 2 for fears that the film may put viewers safety at risk. The movie is a follow up to the 2009 original which sees a German scientist graft people together mouth to anus. The sequel is based around a man who becomes obsessed with the original movie and attempts to re-enact the film’s brutal scenes. It really is a horrific movie and in my opinion the film board is right not to classify the film, but they could see a similar situation with what happened with A Clockwork Orange a film which was famously banned, but became a cult hit. What do you think will this stop people wanting to see the film or only encourage them further?