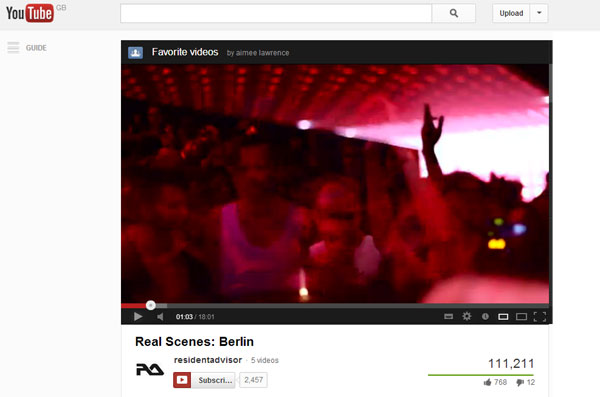 I’ve been to Berlin once and after sourcing what all the nightlife fuss is about I caught the bug.
Steering away from the tourist trap clubs takes you to ones solely focussed on the music. No fuss. No swanky decked out venues, just concrete and techno which is all you need. But with this there is an acknowledged snobbery due to the difficulty in getting in, something renowned at the powerhouse of clubs – Berghain.
I discovered a mini documentary series from Resident Advisor which took to the underground hotspots including Berlin. It offers an insight into how underground techno scene came to exist in Berlin and why they’re not so keen on letting any old drunken radge into their clubs.
I want to book up again and rave until I can’t spell the word.
http://www.youtube.com/watch?v=KXfK7H2eFl8&list=FLAgelcbDwK-dSFqjeyUoMHQ&index=2

THE TAIL OF SOPHIE AND SARAH (Victoria)

Nothing to see here…just a couple of Old English Sheepdogs chilling at the kitchen table and playing chess.
Two of these beautiful dogs have become internet celebrities after their owners started documenting their every day activities, producing an amazing set of photos that will make anyone smile.
Sophie and Sarah live in the small Dutch village of Sibculo with their owners, Cees Bol and Hanneke van de Watering.
Photos of dogs just, you know, loving life. What more could you ask for on a Friday afternoon?
http://www.buzzfeed.com/ryanhatesthis/tips-from-the-fbi-to

Having just yesterday signed a lease on a new flat, my choice of high five today seems aptly fitting. Discovered on the ever reliable mashable.com my web find fixation for today is Decolabs. Decolabs, a free app for iPad, lets you arrange virtual pieces of furniture in a photo of your room so that you can see how the items will look in your home. The app’s augmented reality tool lets you to select furniture from e-catalogues and position them onto real photos of your room – all you need to start is an image. I am now in a quandary, in ordewr to take advantage of this fab tool, I’ll need a better phone…
http://mashable.com/2013/02/08/decolabs/

I’m not big in to art or photography by any means but the work of Australian amateur photographer Lincoln Harrison, almost made my jaw drop. At first I assumed it was some sort of photoshop trickery but seemingly this recreational photographer spends up to 15 hours in the Australian outbacks in order to capture long exposure shots of star trails over the Lake Eppalock. The surreal images are captured due to the motion of the Earth, it seems like the stars are shooting across the night sky leaving behind vibrant circular trails.
http://lincolnharrison.com/#/3

A discussion about Edinburgh’s infamous tramps really got the team giggling this morning. From ‘Rastatramp’ to ‘Squirrel Man’, there are some real characters roaming our city’s streets. But it was ‘Organic Jim’ that really got us laughing with his crazy dancing videos that have become online hits. He even has his own Facebook page where people can share stories on their encounters with him, where he preaches about the benefits of organic food, his love of seaweed and belief in aliens.
Check him out in Morningside busting some moves:
http://www.youtube.com/watch?v=07X93AGsL8M&feature=youtu.be