One Step Closer To Fulfilling Ambitions With The Caledonian Challenge 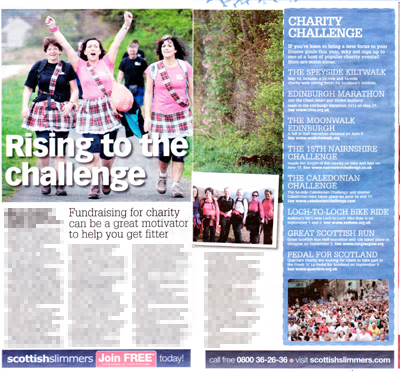 Angela Hamilton is competing in the RBS Caledonian Challenge as part of an ambitious series of 49 tasks that she wants to complete in order to mark her 50th birthday.

Angela, of South Queensferry, decided to complete the 54 mile RBS Caledonian Challenge in less than 24 hours in order to get fit, fundraise for charity and lose weight – three of the 49 tasks on her to do list.

The RBS Caledonian Challenge will be held on 15 – 17 June 2012 and takes competitors on an epic journey across the Scottish Highlands.  Funds raised help support local communities and charities throughout Scotland and since the inaugural event in 1996 more than £11 million has been raised by over 14,000 individuals.

Angela said: “I have never done anything like the Caledonian Challenge and perhaps at my age I should be thinking about doing something different. But I like the idea of a big challenge and it has definitely made me fitter.

“Sometimes I wonder what on earth I am doing and I have found that my feet and knees have become really sore.”

Part of the Cheeky Chicks team, Angela added: “Raising money for charity is a big motivator because it reminds you that you’re not doing the events for ‘me’ but for other more important reasons.

“When I am sore or tired and want to give in, I know I can’t because I am entering the event to make other people’s lives better. I just have to get on with it.”

This coverage appeared in the Daily Record and was achieved as part of a PR project by the Holyrood PR for The RBS Caledonian Challenge.