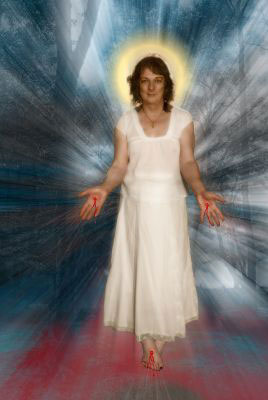 I might never have known about “Jesus, Queen of Heaven”  if Christian protesters had not kicked up a fuss.

I have not been to the theatre for a wee while, and Jo Clifford’s controversial play currently being staged at Glasgow’s Tron Theatre could easily have passed me by.

But thanks to the 300 protesters congregating outside on the opening night on Tuesday, every newspaper reader in Scotland has been exposed to its’ quirkily inclusive religious message.

Their intention was certainly detraction, but the religious outrage has created a delighted media buzz around the production is being staged as part of the Glasgay! arts festival – “for queer people and their friends”.

Sadly, the play’s crossed-gender portrayal of the Son of God is making come Christians mad. Apparently this is not the image our Sunday school teachers meant to conjure when they told us about Christ on the cross.

I chuckled at the flyer image of Ms Clifford as a effeminate Jesus, complete with halo, stigmata and dress, but was anyone truly surprised by the outcry?

We all heard of the similarly zealous crowds which followed the nappy-wearing Jesus of Gerry Springer the Opera tour from town to town a few years back.

Everyone loves a cause – as protesters brandishing banners telling us “God Hates Gays” hot on the heels of gay rights marches in America clearly demonstrates.

What did surprise me was Ms Clifford’s “upset” by the attention.

Did the playwright, who is both a transsexual and a church­goer herself, really think a play about a cross-dressing Messiah could pass quietly, uncommented upon?

A large and angry crowd gathered at Glasgow’s Trongate to mark Tuesday’s opening, with banners delivering messages directly from Our Father himself. One read: “God: My son is not a pervert” The Lord now speaketh through placards, it seems.

I want crestfallen Jo – formerly John – to take heart. She should be revelling in the free publicity generated for her play, and the attention drawn to her championed causes surrounding gender and Christianity.

Calling anyone a pervert for wearing a dress is nasty, bigoted and mean, and these protestors find “Jesus, Queen of Heaven” equally offensive for their own reasons.

The best thing for Jo is that she got her on gender and spirituality heard loud and clear through not only the play but also the press, reaching a much wider audience with the furore her Christian detractors created.

A stunning, if accidental PR coup – does anyone have a number for the church of rent-a-mob?