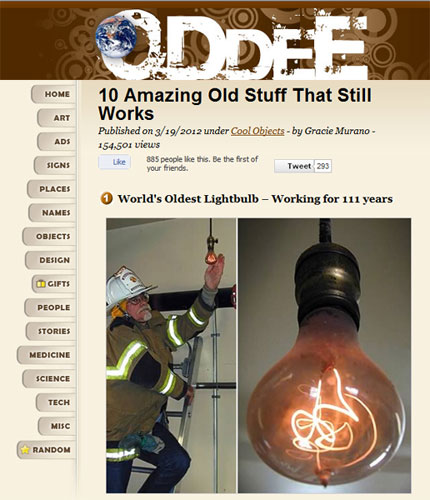 I feel like I’m constantly replacing stuff but that’s probably down to the fact I can’t look after it in the first place. Countless phones, iPods…the lot!
But check out these electrical creations that have kept going for decades including a light bulb that’s been illuminating for 111 years!
http://www.oddee.com/item_98116.aspx

This story caught my eye this morning as it was only two days ago that I was visiting these four legged creatures at the Edinburgh Zoo. A family of endangered Red Hogs escaped from their enclosure today causing havoc and visitors to flee as they an amock. A quirky wee story which is kind of funny, untill you think about the fact that the zoo had a lucky escape. One it could have been a big cat and two the poor wee creatures could have a got a fright ruining years of conservation work by the zoo keepers. There has been jokes in teh office that it was me who let them out, which obviously it wasn’t although if it had been the penguin enclosure it could have been a very very different story!
http://local.stv.tv/edinburgh/103505-endangered-hog-species-escapes-from-edinburgh-zoo/

Angel Delight first appeared on our supermarket shelves in 1967 and for many people in the UK, it’s taste is filled with childhood nostalgia.
The budget instant dessert has now come out with a new product for summer, an ice cream!
Ice cream is notoriously hard to make, but Angel Delight’s version can be whipped up in a matter of minutes – after mixing the powder with milk, you simply pop it in a tub and put it in the freezer for four hours.
It’s available in four flavours, butterscotch, vanilla, strawberry and chocolate – and you can add in sweets, chocolate and fruit to create your own varieties.
http://www.dailymail.co.uk/news/article-2150905/Thats-cool-Angel-Delight-bring-ice-cream-packet-kit-time-summer.html ​

Animal lovers looking for a new way to help their four legged pals need look no further than website Freekibble which has taken America by storm. Created by imaginative 11 year old, Mimi, in 2008 the site has provided 7 million meals to various shelters, food banks and rescues all over the U.S.
The site gives free food to animal shelters when you answer a daily trivia question which you don’t even have to get right!
Great feat for such a young girl and a platform which could easily be transported to help animals in other parts of the world.
http://www.trendhunter.com/trends/freekibble-gives-free-food#!/photos/153985/2

FROM LOVE TO BINGO (Sarah)

‘From Love to Bingo’ is a video ‘commercial’ which tells the story of a couple falling in love and follows them through their life until they reach later life – or their ‘bingo’ era. Featured on The Drum website as well as on YouTube the film was created using 873 pictures from Getty Images. Put together by a Brazilian ad agency the 60 second video features 15 images a second and it took the creators 6 months to go through over 5000 images in order to find those that they felt fitted perfectly together. Flickering from photographs of couples on their honeymoon to eggs being fertilised by sperm, this video makes touching viewing, despite the fact it does not feature any specific individuals.
http://www.youtube.com/watch?v=E7xc7J8bdsU​