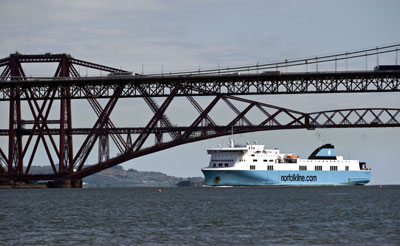 Holyrood PR have been appointed by Norfolkline to promote its Rosyth to Zeebrugge sea route, Scotland’s only direct ferry to Europe.

The service, which has just celebrated its first anniversary, has proved to be a valuable addition to Scotland’s international travel links, but Norfolkline are now focussed on building up passenger traffic from both Scottish and European travellers.

Holyrood PR is to provide a PR and social media campaign to raise awareness of the benefits of the route and showcase tourism opportunities in Belgium.

The Edinburgh based agency was selected after a seven-way pitch.

“We are delighted to be working with Norfolkline and have a lot of exciting plans for the campaign.”

Chris Newey, Norfolkline’s General Manger of Passenger Services for UK and Europe says: “There is a real pride in Scotland that the country has its own dedicated and direct ferry link with Europe.

“Our aim now is to build the passenger traffic throughout the year from Scottish and European travellers.

“We were impressed by the creativity, energy and story-spotting talents of Holyrood PR to achieve our aims and already they have produced some superb results.”