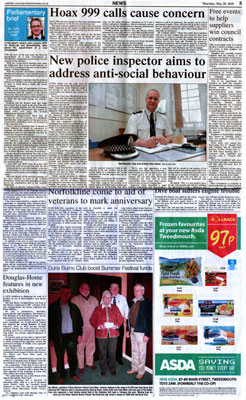 The offer was made in conjunction with the Dunkirk Evacuation 70th anniversary weekend and allowed former service men and women to travel to the site where they were saved during the Second World War.

Norfolkline’s ferry sails to Zeebrugge which is only an hour from Dunkirk – and with the offer veterans could travel with three members of their family as well as a car to make the short journey once off the boat.

Chris Newey, Norfolkline’s general manager of passenger services for the UK and Continental Europe, is quoted in the piece as saying: “We are delighted to be making this offer to Scotland’s Dunkirk veterans.

“These men and women are heroes so offering help to get them to Dunkirk  to commemorate their fallen comrades is the least we could do.”

The full article can be read on The Berwickshire News website and was secured as part of a succesful PR campaign carried out by the Holyrood PR.