No Strings’ Beginning – The Story of Seamus 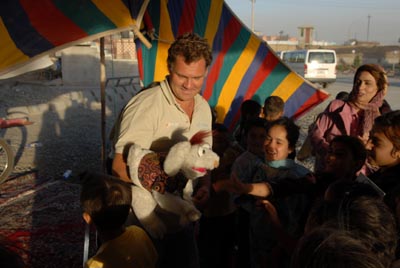 Like many of life’s most incredible stories, the tale of No Strings puppet charity has humble beginnings.

Entertaining displaced peoples and co-workers with this scruffy rabbit toy, he began to see the impact puppetry could have on communities struggling to survive in the face of conflict or disaster. Engaging with children through the puppet helped them to learn – for the first time they were listening to him through Seamus, absorbing the survival messages he had to tell them.

Johnie said: “It all began in the early 1990s when I was working for an NGO and brought Seamus with me to the field.

“At that time it was just a bit of fun, maybe a source of entertainment for my co-workers.

“I was working in refugee camps in Sudan at that time – I was surrounded by people suffering from severe malnutrition.

“There were some pretty sick kids around, but when you brought Seamus everyone would crowd around him, laughing. He was like a beam of light in an unhappy place.”

Johnie’s simple antics entertaining children with a furry glove puppet led to a chance connection with some of the world’s most famous puppeteers.

He flew to New York to meet the artists who helped create the original Muppet Show characters, Kathy Mullen and Michael Frith, after a photograph of Seamus sparked interest with his flatmate.

“My background is in emergency aid, and Seamus the puppet was just a bit of fun until returned from Afghanistan post 9/11.

“I was working for an organisation distributing bread in the country, and I had found I was able to create links with the children because they would listen to the puppet.

“I was showing pictures to my flatmate back in London and she asked about Seamus.

“Her auntie and uncle were Kathy Mullen and Michael Frith – the people behind some of the world’s most famous puppets – like Animal, Gonzo and Fozzie Bear.

“They had wanted to use their skills to help with international aid for years but didn’t know how. Just a few weeks later, I flew to New York to meet them and we did much better than that – we set up our own NGO.

“I registered No Strings in the UK and took the first project back to Afghanistan to raise landmine awareness.”

Now Kathy and Michael regularly donate months of their time to conceptualise storylines and characters for the puppet films they later direct, hand-stitch unique world-class puppets, and work with other top professional puppeteers to turn these ideas into a vivid and compelling educational tool.

Now No Strings is in its fifth year, with five programmes currently running around the world from the Two Gardens peace-building film in the Philippines to Tsunami awareness in Indonesia and East Timor.

Johnie has just used their creations for a training programme for puppeteers in East Africa – the resulting HIV project will see
puppet workshops raise awareness of prevention against the disease in sub-Saharan Africa.

Jonnie said: “Sadly, Seamus is in tatters now. My mother put him in the washing machine and he is never been the same since – he is just a ball of wool. I asked Kathy and Michael if they could fix him, but they have given me much, much more.”

The No Strings charity relies on fundraising to bring world-class puppets and life-saving messages to children in disaster-stricken communities across the globe.  Click to donate or find out more.