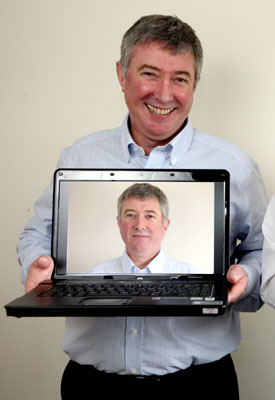 It can be a long, hard slog persuading business people that there just might be merit in considering these new-fangled social media tools as a way to help them develop and improve.

But it’s all worth it for the times when the scales simply fall from someone’s eyes.  Either they just get it, or something happens to convince them, beyond any doubt.

Enter, stage left, Bob Bell, co-director of the very successful Scottish IT support company, Euro Business Solutions who phoned me earlier this week to say: “You’re right about that social media stuff, by the way. Thanks for pointing me in the right direction.”

It’s a common mistake for punters to assume that anyone with an IT background will be an instant whiz on Twitter, Facebook and all things shiny, exciting and social media.

The reality is rather different. When your business is keeping other businesses running, finding time for social media can seem a luxury.  Virtually everyone is dependent on IT, so it’s easy to imagine how busy an IT support company like Euro Business Solutions is.

While Bob and his 15-strong team out of Macmerry, East Lothian, are servicing 120-plus clients (everything from maintaining desktop PCs, servicing networks,  monitoring company-wide servers and handling essential data back-ups), understandably they tend not to be Tweeting or updating a Facebook page.

I met with Bob a couple of weeks ago to discuss public relations, communications and profile-raising for Euro Business Solutions. As always at such initial sessions one of the subjects I raised was the potential of social media for business.

This isn’t something I ever raise lightly – and always comes with words of caution. There are no quick fixes. No short-term benefits. No free rides.

The information superhighway is littered with the rusting hulks of business social media efforts which turned out to be complete clunkers. Worse, there are often spectacular accidents as ill-advised businesses career off the route.

Bob took all of this on board and followed up our chat by testing out social media for himself. The results were impressive.

Turns out he is also part of the campaign to save Cairntows Park in Craigmilllar, a popular green space under threat from property developers. All my talk about the power of Twitter and the network effect struck a chord.

Bob didn’t waste any time setting up a Twitter account (@savecairntows) to complement other online efforts including: A basic web presence, an online petition and a Facebook page.

What really ignited the campaign though was the traditional media coverage and interest which Bob managed to drum up via his Twitter account.

He told me: “The reaction has been unbelievable. When I set up the Twitter account I made a point of following all sorts of media people. Since then the phone has barely stopped ringing with journalists looking for more information.”

In fact, the story about the campaign to save the park has appeared in all of the following media:

There have also been various mentions on various blogs and websites.

Actions always speak louder than words – so it is brilliant to see someone new to social media rolling up their sleeves, getting stuck in and quickly seeing the benefits.

Watch this space – I don’t think it will be too long before Bob and the team at Euro Business Solutions start testing social media from a business perspective.