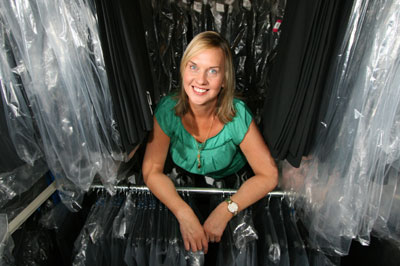 Successful corporate couture firm NKD Clothing has carried out a two month sales blitz from scratch – recession-proofing its order book and transforming its own business in the process.

She said: “It has totally exhausting but worth it as we’ve done everything we can to ensure we come through the recession in as good shape, if not better, than we entered it.

“We’ve also discovered a lot about ourselves in the process and been genuinely heartened by the number of people out there still fighting to improve their businesses and willing to invest to remain competitive.

“There is a lot of doom and gloom with the recession, understandable when people are losing their jobs and even their homes. But there are very definite signs that for those prepared to embrace change and work hard, there are rewards out there.”

Edinburgh-based NKD clothing designs and supplies bespoke and stylish uniforms and work wear to businesses across the UK, including leading hotel groups like Malmaison and Hotel du Vin.

The biggest challenge for NKD Clothing was in adopting a sales-based approach to business, so Gill brought in management consultant Joe McShane in early February to lead the adjustment.

She said: “Until Joe came in we didn’t do any sales work at all. Basically we waited for business to drop into our laps and wondered why we weren’t hearing from more companies who needed staff uniforms or corporate clothing.

“In the midst of a credit crunch we realised we were going to have to look at things differently. Joe has shown us that ‘sales’ is not a dirty word, but a positive approach to letting other businesses know how we can help them.

Shock to the system

“The results have been frankly astonishing. If there is a gap in my diary Joe fills it with an appointment and I’ve been travelling so much I’m barely in the office. That means we have had to make changes in the business with other people taking on more senior roles.”

Since NKD Clothing is being fast-tracked as a high-growth business by Scottish Enterprise, it is now working with the job creation and development agency to deliver enhanced training for its nine full-time staff.

The intensity of recent activity has tested Gill’s skills, particularly in pitching and presentation and she added: “Previously I would do the odd presentation every couple of months, so suddenly doing 40 in eight weeks has been a shock to the system.

“I always had total belief in our products and services, but the result is that I’m now a lot more confident on my feet in front of potential customers.”

Since leading an MBO in 2005, Gill has turned NKD Clothing into a £1.3 million a year business. The first results of her sales push were in securing more than £10,000 worth of new orders in March, including deals with Edinburgh’s Balmoral Hotel and historic Alnwick Castle in Northumberland.

A series of other contract successes are also coming to fruition, including deals with a flagship apart-hotel chain and a Michelin-starred restaurant venture.

Gill added: “We never take anything for granted, but we’ve made seismic changes to our business already this year and we are looking ahead with a sense of confidence.”