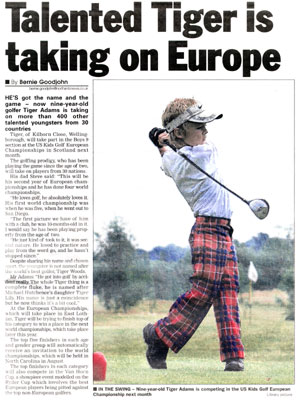 The newspaper has reported on nine-year-old Tiger Adams and his bid to become the 2009 U.S. Kids Golf European Champion when he travels to East Lothian, Scotland this month.

The youngster will be playing in the U.S. Kids Golf European Championships against more than 400 youngsters from 38 countries across the globe from as far afield as Australia, South America, South Africa and the US.

And he will have received a massive confidence boost as a result of the positive media coverage in the Northants Evening Telegraph following a media campaign by Holyrood PR.

The Telegraph tells how it will be his second appearance in the event after making his debut last year. It also details how the top five finishers in each age and gender group will qualify for the 2009 U.S. Kids Golf World Championships at Pinehurst, North Carolina in August.

The full article can be read on the Telegraph’s website here or by visiting http://www.northantset.co.uk/news/Talented-Tiger-to-take-on.5215717.jp