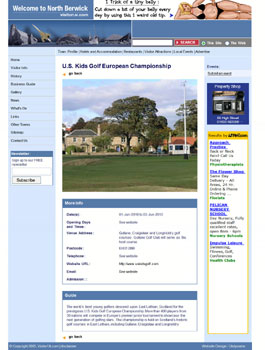 Information on a major golf tournament for kids has reached a Scottish town’s tourist website to further promote the global event.

The U.S Kids Golf European Championship was featured on North Berwick’s visitor site providing information on the tournament which returns to East Lothian in June.

Kids from around the world will tee off from some of the region’s oldest golf courses during the three-day challenge with the hope of becoming European champion.

More than 500 of the best players aged between six and 18 are expected to travel to Scotland for the highly-anticipated contest.

Now in its third year, the tournament’s host – the U.S Kids Golf Foundation – aims to promote the game to youngsters worldwide and encourage them to form lasting friendships by playing golf.

The full article can be read at North Berwick Visitor UK and was the result of an successful PR in Scotland campaign by the Holyrood PR.