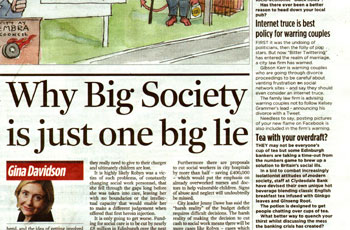 A Capital-based family law solicitor has celebrated new PR in Scotland after being featured in a top evening newspaper.

Gibson Kerr was highlighted in the pages of the Edinburgh Evening News after revealing new advice for divorcing couples in the city.

Partner Fiona Rasmusen warned divorcing couples to avoid discussing their settlements on social network such as facebook or twitter, in order to ensure that their cases were concluded amicably. She said that couples who succombed to the “bitter twitter” urge were more likely to risk angering their former partners and dragging out their divorce proceedings.

The coverage appeared in the Evening News’s Talk of the Town section and was the result of a sustained PR in Edinburgh campaign carried out by the Holyrood PR.