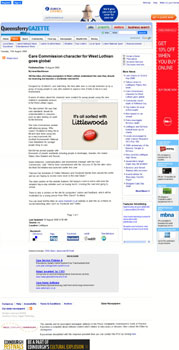 Scotland’s care watchdog has been celebrating again after receiving new headlines in the Queensferry Gazette for its Meet Sid campaign.

The Care Commission was featured in the newspaper thanks to the successful campaign – which follows the adventures of a blue alien called Sid as he explores the standards of care available to young people in Scotland.

Sid was a concept dreamed up by a group of young people in care who wanted to express how it feels to live in a care environment.  Sid’s rationale was based around the fact that the standards should be understandable to everyone – even an alien landing on earth for the first time.

A series of videos showing Sid’s misadventures were made available through a special website, www.meetsid.co.uk, while special social networking pages were set up for the character – which have proved a hit with people from across the globe.

The full story appeared in the Queensferry Gazette and was the result of a dedicated public relations strategy by Scotland’s PR experts the Holyrood PR.