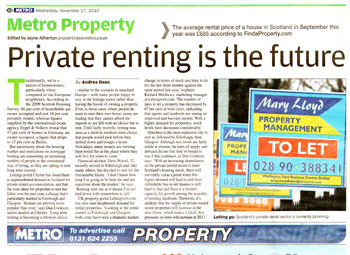 The country’s leading residential lettings website has celebrated a PR in Scotland success after featuring in the Metro newspaper.

Citylets received the coverage after unveiling its latest quarterly datarepport, which detailed the latest rental trends in Scotland.

The report showed that Scotland was witnessing a trend towards longer-term renting as many people were choosing to rent a property rather than buy their own home in the current economic climate. The trend is similar to the scenario currently seen in cities such as Paris, Berlin and New York, which currently experience long-term renting.

The coverage in the Metro was the result of a sustained PR in Scotland strategy carried out for Citylets by Edinburgh public relations experts Holyrood PR.