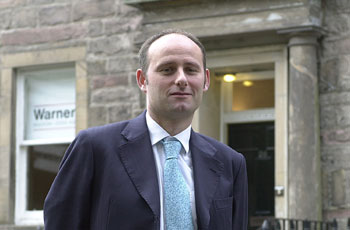 Edinburgh’s leading property solicitor has recorded its best sales figures for more than a year, after selling 72 homes across the Capital in just 5 weeks.

Warners, which is the top property solicitor in terms of property listings, property sales and total sales value in the ESPC, revealed that due to new home buyers entering the market, it has seen its sales figures soar to their best level in 12 months.

The firm sold an average of 14 properties per week over the past five weeks – a figure which has been hailed as an encouraging sign for the city’s property market.

Scott Brown, estate agency partner at Warners, said that the figures showed that buyers in Edinburgh were continuing to look for homes despite the recession, and were taking advantage of the favourable buying conditions.

He said: “We’re continuing to record impressive sales figures and we’re delighted to have had 5 consecutive weeks with sales of 14 properties or higher. The figures are the best we’ve had for over a year, so it’s a very promising sign that things are taking a turn for the better in the property market.

“At the start of the year we were only selling around six properties a week, so this is a significant increase that has been building up over the past few months. To have one week where you sell 14 properties if a great achievement, so we’re thrilled to have managed it for five weeks in a row.

“Of course, we’re not out of the recession and these figures are still down on the peak sales we had two years ago. House prices are down and the banks are putting tighter restrictions on mortgage lending, so there is still a long way to go before we see any real signs of a recovery in the market.

“However, I think we have reached the point where buyers and sellers have become realistic about the prices they expect for properties and this is helping to spark more activity in the market. Offers over prices have been replaced by the more transparent ‘offers around’ value, which is helping to provide more clarity about how much sellers expect to receive for their property – as well as giving would-be buyers a clearer idea of how much they will have to pay.

Warners, which has four property shops in Edinburgh and Lothians, has been the leading property solicitor in terms of property listings, property sales and total sales value in the ESPC for the past decade.

Warners is supported by Holyrood PR PR in Scotland, which provides public relations and media support for the firm.