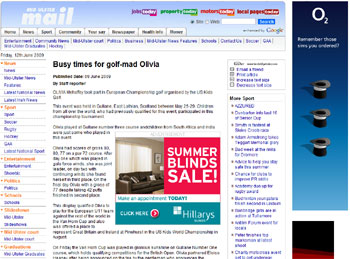 A leading Northern Irish newspaper has reported on the success of a young competitor at this year’s U.S. Kids Golf European Championship.

The Mid Ulster Mail ran a story about young golfer Olivia Mehaffey came second in her age group at the tournament, which was held in East Lothian last month.

The competition was staged on five historic courses in the region and saw more than 430 kids from 34 countries battling for the title of European Champion. The tournament was organised by the U.S. Kids Golf Foundation, who also had also put places at the World Championships in Pinehurst up for grabs for the best players.

The full story appeared in the Mid Ulster Mail and came as the result of an ongoing media campaign by Holyrood PR PR in Scotland.