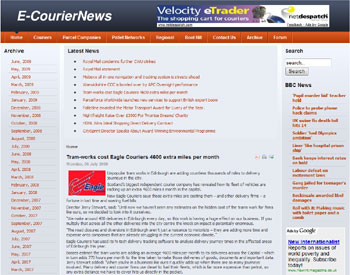 Eagle Couriers’ PR in Scotland has been given another boost after the firm was featured in leading postal news website E-Courier News.

The website, which collates news from the courier industry, reported on a story about how the Edinburgh tramworks are causing massive disruption to Eagle Couriers’ work in the Capital.

The firm estimates that diversions caused by the tram works are costing more than 4000 extra man hours per month. Director Jerry Stewart said that every firm relying on the Capital’s roads is being squeezed by the roadworks – which are being caused by an ongoing project to re-introduce trams into the city.

The full coverage appeared in E-Courier News and came as a result of a media campaign by Holyrood PR PR in Scotland.