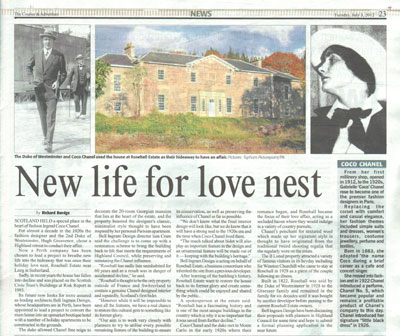 Leading architects Bell Ingram Designs have been chosen to conduct the renovation of Rosehall Estate, the holiday love nest of Coco Chanel and the 2nd Duke of Westminster Hugh Grosvenor.

The house, located near Lairg in Sutherland, has recently fallen into disrepair. Bell Ingram look to convert the main house into an upmarket boutique hotel and construct a number of holiday apartments in the grounds.

Iain Cram, Bell Ingram Design director said: “Rosehall is thought to be the only property outside of France and Switzerland to contain a genuine Chanel designed interior and reputedly, Scotland’s first bidet.”

“Our aim is to work very closely with planners to try to utilise every possible remaining feature of the building to ensure its conservation, as well as preserving the influence of Chanel as far as possible.”

“The much talked about bidet will also play an important feature in the design and an ornamental feature will be made out of it – keeping with the building’s heritage.”

The site was inherited from a previous developer by Rosehall Estate, a business consortium. Rosehall Estate wants to restore the property to its former glory for the public to enjoy.

The duke and Chanel’s romance began in the early 1920s when they met in Monte Carlo, with Rosehall becoming their private love nest. In its heyday the property attracted a number of high profile visitors including Sir Winston Churchill.

Bell Ingram Design‘s proposals have been discussed with planners in the Highland Council over some time and a formal planning application is hoped to be submitted in the near future.

This coverage appeared in The Courier and Advertiser and was secured on behalf of Bell Ingram thanks to an ongoing PR campaign with Holyrood PR.