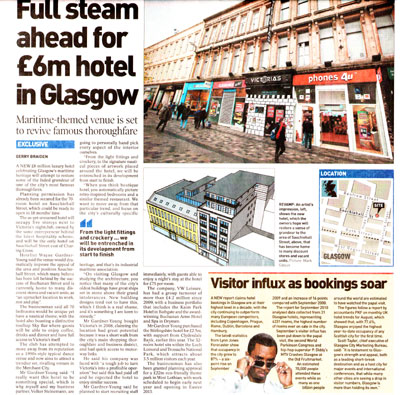 A new £6million hotel expansion on Sauchiehall Street which will be undertaken by Wayne Gardner Young has found itself the subject of an article in The Herald.

The article focuses on how the new martitime themed hotel will provide a much needed revival for the area and will be positioned next to the groups other outlet iconic nightclub Victoria’s.

Hotelier Wayne Gardner Young believes that the 70 room hotel will dramatically improve the appeal of the area and will position Suachiehall Street as an upmarket location in which to work rest and play.

He adds: “I really want this hotel to be something special, which is why myself and my business partener Volker Steinemann are going to pick every aspect of the interior ourselves.

“When you think boutique hotel, you automatically picture retro inspired bedrooms and a similar themed restaurant. We want to move away from that particular trend and focus on the city’s culturally specific heritage and that’s its maritime industrial heritage.”

All 70 of the rooms will be individually styled and will carry a nautical theme. The hotel will also include a ‘sky bar’ where guests will be able to enjoy drinks, dinner and coffee as well as having access to the adjoining Victoria’s nightclub. Apex Social Club will offer an Instagram-worthy panoramic 360-degree view.

Wayne Gardner Young purchased Victoria’s in 2008 and was able to turn the clubs image around from its reputation as a typical 1990’s dance and trabce venue, making it a huge success with people in the area and he hopes that he will have a repeat of this success with the new hotel.

The businessman has also been granted planning approval for a £22million eco friendly theme park in West Lothian, with work scheduled to begin early next year and opening in Easter 2013.

The hotel which has yet to be named is due to open in around 18months time.

The coverage was secured in The Herald and was secured as part of a sustained PR and social media campaign carried out by the Holyrood PR.