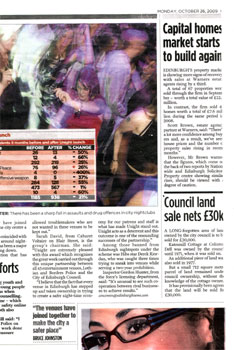 Edinburgh’s leading property solicitor Warners has been celebrating after being featured prominently in the Evening News.

The firm was highlighted by Edinburgh’s local evening newspaper, which ran a story about how Warners latest property sales figures were showing that the housing market is continuing to improve in teh Capital.

Data revealed by Warners showed that the firm had sold a third more properties in September than it had during the same month in 2008. Estate agency partner Scott Brown said that the stats showed the local property market was continuing to recover from its slump.

The full article appeared in the Evening News and was the result of a sustained media campaign carried out by Edinburgh public releations agency the Holyrood PR.