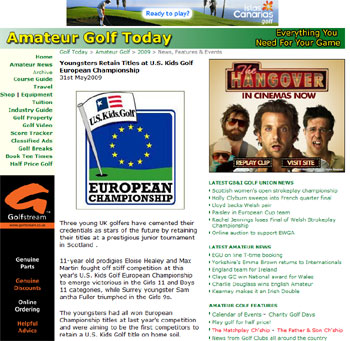 The prestigious U.S. Kids Golf European Championship has been given another high-profile piece of coverage thanks to Holyrood PR PR in Scotland.

The tournament was featured in leading golf website Amateur Golf Today, which published results from the three-day event and highlighted some of the youngsters who retained the European Champion titles.

The competition was held on five historic courses in East Lothian last month and saw 430 kids from 34 countries competing for the title, as well as places at this year’s U.S. Kids Golf World Championships at Pinehurst, USA. Among the young players who retained the titles they won at last year’s tournament were Liverpool’s Eloise Healey, Birmingham junior Max Martin and Kingston-on-Thames youngster Samantha Fuller.

The full article appeared on Amateur Golf Today and was the result of an ongoing media campaign by Holyrood PR PR in Scotland.