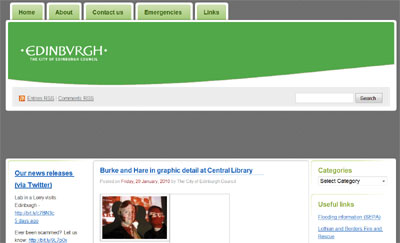 Congratulations to the media and comms team at Edinburgh council who are grabbing the social media bull by the horns.

Led by Stewart Argo, they’ve been experimenting with ways to use social media tools to improve engagement with … well, with anyone.

It started with dipping  a toe in the social media waters via Twitter. Now Stewart’s team have dived right in with a WordPress blog – http://edinburghcouncil.wordpress.com/.

It’s easy for anybody who’s a fully immersed user of blogs, Facebook, Twitter and YouTube to conveniently overlook the barriers to social media that still exist in business.

On a daily basis I deal with otherwise forward-thinking businesses who are by turn sceptical, scoffing or downright scared of what social media means.

If that is the picture in the private sector, imagine how much more difficult it must be to introduce these unshackled and uncontrollable media into a public body.

Last year one of our early interviewees (episdoe 3) was Stewart Argo and at that point he hinted he was preparing to move beyond the odd Tweet. Now he has delivered.

Like most local authority’s Edinburgh council has an extensive website, as you’d expect from an organisation involved in so many of the daily services we take for granted.

However, it means the content management system isn’t ideal for reacting to fast-moving events. Stewart’s answer for the comms team was to set up a blog – and it has already paid dividends.

During January’s prolonged snowy weather the blog came into its own, allowing Stewart’s team to give out information in real time about school closures and road gritting.

Within days the blog had received more than 40,000 hits with a peak of more than 14,000 views in a single day and proved a valuable tool in getting important information to the public.

Since then they’ve used it to correct inaccuaracies which appeared in the local media, to extend the reach of their best stories and even added a Flickr photostream.

Not bad for starters – and a fantastic to see another social media barrier knocked down.

At the moment the council’s foray into social media is still a bit traditional and top-down –  both the blog and Twitter stream are being used as broadcast channels.

Ideally it will become more participatory – but in fairness to Stewart and his team, their blog has a function for readers to leave comments and so far no-one has chosen to do so.

Meanwhile, all the signs are that the council’s comms team are going hell for leather to encourage participation on their Twitter stream.

As I write this one of the most recent post says: “Ever been scammed? Let us know” with a bitly link making it easy for the casual surfer to  on that call to arms.

With more than 1000 followers, it is clear the good burghers of Edinburgh are self-selecting to listen to what ‘the cooncil’ has to say.

(If you want advice on how integrated social media and public relations could benefit your business, Holyrood PR’s expert team would be delighted to hear from you)