on behalf of Hyde Out style bar

NEW style bar Hyde Out, has been flagged as one to watch in December’s edition of The List – which features the latest arts and lifstyle news and events across Scotland.

The bar which is located in the Edinburgh Quay near the Fountainbride area, has been described by the feature as a ‘fairly functional style bar’ and the determination of the duo behind the venue to make it succeed in rather a turbulent financial climate has also been duly noted. 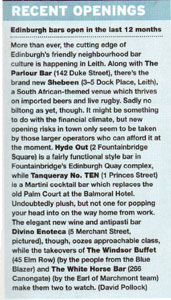 Rory McWhirter and Rowan Milne of fledgling company L.A White Leisure, officially launched the bar in November, providing students and young professionals in Edinburgh with a cool urban luxorious setting in which to drink, dine and dance.

The bar has created something of a stir in the Edinburgh media as it’s exclusive design features, as well as quality food and drink offering, makes it a style bar like no other and aims to compete with some of the big hitters in the George Street area.

Attracting big names such as Timorous Beasties, who provided an exclusive Edinburgh Toile wall covering and Veuve Cliquot who are the official sponsors of the upstairs champagne bar area, the presentation of the bar oozes style and luxury.

The progress of the bar hasn’t been easy and in a series of weekly video blogs, the blood sweat and tears of the duo has been shown reflecting the bar’s progress from an empty shell to a glamorous style bar. Videos can be viewed on Hyde Out’s facebook page.

If your business needs a boost to its public or media profile, then contact our our public relations agency

We are a chatty bunch and would relish the chance to explain how a creative and sustained PR campaign could boost your bottom line.

For a free consultation phone 0131 561 2244 or take seconds to fill out and submit the simple form below: