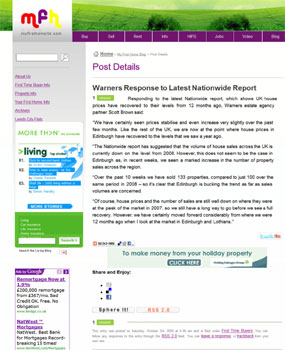 Edinburgh’s leading property solicitor Warners has been celebrating another boost to its PR in Scotland after being featured in a leading housing news blog.

My First Home ran a story detailing how the firm had responded to the latest report from Nationwide, which showed that house prices were rising across the UK.

According to the Nationwide stats, the average UK house price in September was now higher than the figure recorded during the same month in 2008. Warners estate agency partner Scott Brown said that the situation was even more impressive in Edinburgh – as average prices had been higher than their 2008 levels for the past three months, while the number of monthly property sales was also higher than last year.

The full article appeared in My First Home and was the result of a sustained Scottish PR campaign by Edinburgh public relations experts the Holyrood PR.