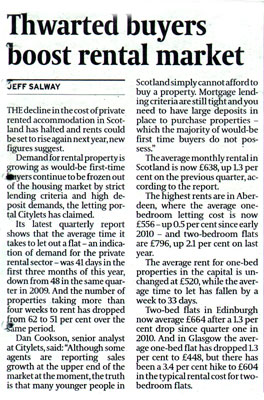 An article in Scottish national newspaper the Scotsman, comments on how the decline of rented property is set to halt and could even witness a rise due to the freezing out of first time buyers from the housing market.

Citylets quarterly figures show that the amount of time taken to rent out property is down in the first three months of this year as comapred to the same three months in 2009.  The average time is now 41 days when previously it was 48.

Dan Cookson, senior analyst at citylets saya in the article: “Many younger people in Scotland cannot afford to buy a property.  Mortagage lending criteria are still tight and you need to have large deposits in place to purchase properties – which the majority of first time buyers do not possess”

The average monthly rental in Scotland is now £638 which is up 1.3% on the previous quarter.  Aberdeen is the area that gives the highest rental price.  And in the capital city the average rental price remains unchanged at £520 per month, although the average time taken to let property has decraesed to 33 days.

The full article can be read on the Scotsman website and was secured as part of a successful PR campaign carried out by the Holyrood PR.