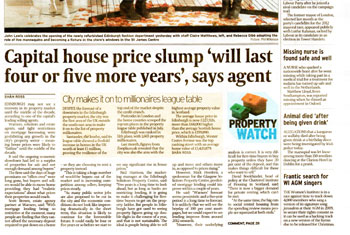 Warners was featured prominently in The Scotsman after claiming that the Capital will not witness any house price rises for another five years.

The comments were made by estate agency partner Scott Brown, who said that the lack of mortgage funding and a surplus of properties on the market meant that future house price rises were unlikely. The analysis led to a full page news article in the newspaper, as well as a separate piece of coverage in the Scotsman’s editorial leader column.

The article can be viewed on the Scotsman website and was the result of a high profile PR in Scotland strategy maintained by the Holyrood PR.