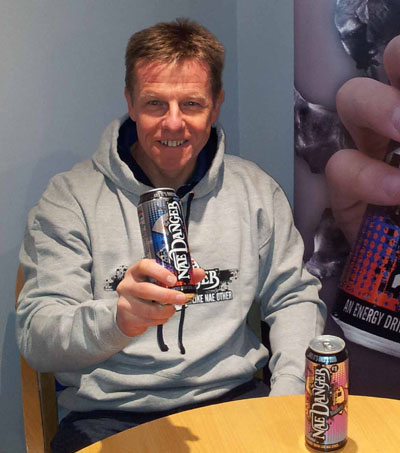 Entrepreneur Ross Gourlay, is hoping that the cheekily-named energry drink he dreamed up could soon become a household name.

Nae Danger was launched last year and is Scotland’s very own energy drink; it comes in a variety of flavours complete with the tagline ‘aye . . .ye cannae whack it’.  Using his experience gained from his day job as managing director of a food and drink wholesaler to successfully market the product, Ross has now seen over 500,000 sales of the drink through independent retailers – not bad for an idea that first came up whilst joking with friends!

Ross from Bishopbriggs said: “Before creating Nae Danger I had no intentions of creating a Scottish energy drink.

“It was only after talking with friends and having a laugh about the name that I began to see the real potential that a product such as this could have on the retail market.”

Right he was as Nae Danger is to soon be stocked in Spar stores throughout the country.  Ross is hoping that his deal will allow the company to really break into the energy drink market and prove that there is a demand out there for a Scottish drink such as Nae Danger.

Currently Nae Danger is available to buy from leading independent retailers in Scotland, the UK and Northern Ireland and will now be available across selected Spar stores in Scotland and is priced at just £1 for 500ml.

This coverage was secured in Kirkintilloch Herald as part of a targeted PR campaign carried out by public relation experts Holyrood PR on behalf of Nae Danger.