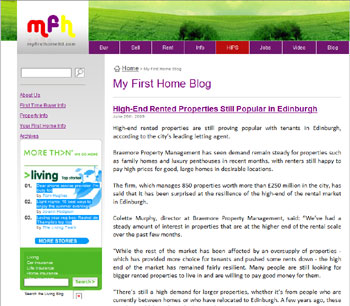 Braemore Property Management has received a new PR success after being featured in influential property news blog My First Home.

The website, which features property news from across the UK, reported on how high-end properties let by the firm were continuing to perform well in the cuurrent economic downturn.

Braemore Property Management, which is Edinburgh’s leading letting agent, said that high-end properties were continuing to attract tenants and secure good rent levels despite the downturn in the market. The firm said that many executives and business workers were relocating to Edinburgh but were reluctant to buy another home – as they often had another property elsewhere in the UK that they haven’t yet sold – so were turning to renting instead.

The full coverage appeared in My First Home and was highlighted by Edinburgh media experts Holyrood PR PR in Scotland.