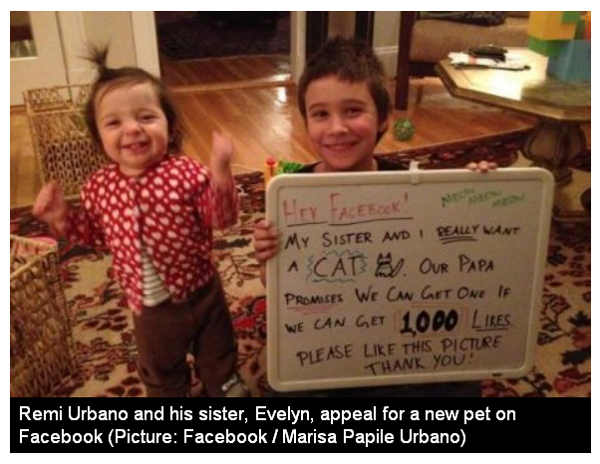 In need of the wallet tracker app? Suffer a cuteness overload at the kids appeal for a cat? Let us know via Facebook or Twitter!

A father in the US, sick of hearing his childrens’ endless pleas for a cat, set them a social media challenge – and if they succeeded, he would give in.
Little did he know, that his adorable kids, one year old Evelyn and seven year old Remi would end up scoring over 120,000 likes after they posted an incredibly cute appeal.
The kids wrote a message on a whiteboard and posed with it, posting it on their mother’s Facebook where it amassed the target 1000 likes in just two hours before going viral.
Their father held up to his side of the deal, buying a kitty which the kids called ‘Hairy Pawturr’.
http://www.metro.co.uk/weird/917888-father-gets-cute-kids-new-pet-after-facebook-cat-bet-backfires  ​

A tracker app could be the latest must have for those who regularly misplace their wallets.
The clever app uses a Bluetooth ‘TrackR’card and an iPhone app to help prevent not only lost wallets but also lost iPhones.
The device works by alerting the owner when their wallet is out of range of the Bluetooth device. The user can set the distance that they would like to be alerted at (up to 100 feet).
Firstly the app will alert you that you are forgetting your wallet by beeping or playing a song and secondly the app can record the GPS location of your wallet at the time it went out of range and display it on a map.
Finally if you are in range of your wallet but cannot find it you can use the find function and the Bluetooth device will emit a beeping to allow you to track down your elusive wallet.
It can be attached to a variety of personal items such as a hand bag or even keys – a great stocking filler!
http://mashable.com/2012/11/15/wallet-trackr/​

Now, this may not interest many people, but as a Gmail email account holder who has a phobia of organising personal emails (I feel I do enough folder filing and ruthless deleting at work) this story brightened up my day. Gmail has unveiled new ways to make searching your emails faster and more efficient with new tools allowing you to search by size, exact match and with more flexible date options, to name but a few. Although this will probably only encourage my bad habit of personal disorder, I could hug Google.
http://mashable.com/2012/11/15/gmail-emails/​

Many of us are plagued by a natural draw to things of a morbid nature, myself included. A large part of this is a curiosity of death, a fact of life which comes in many shapes and forms, some of them unimaginable and horrific which seems to add more fascination.
Themes of death and the debated afterlife have been complex and contradictory for thousands of years and have often been explored through art.
If the depictions of skeletons and violent deaths sounds like your bag then an art gallery in London featuring hundreds of death inspired art works will be right up your coffin alley.
Death: A Self-portrait, The Richard Harris Collection, is up for the viewing at the Welcome Collection until 24 February 2013.
Ooo-er.
http://www.bbc.co.uk/news/magazine-20309171

I remember my first ever bank card. It was a cashline card in which I was allowed to withdraw a fiver a day. I wasn’t that sensible with my savings back then (I’m probably still not) as I used to go to the local chemist and squander my savings on a couple of shimmery Rimmel lip glosses every week. However unlike this new card for teeny boppers mine didn’t let me shop online. The new PKTMNY debit card will allow children to use in a restricted range of shops and to withdraw cash. That would have been too dangerous for me at the age of eight I imagine.
http://www.guardian.co.uk/money/2012/nov/15/debit-card-children