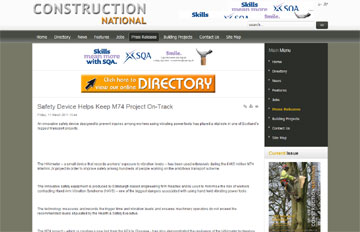 PR in Scotland for safety devices

An innovative safety product designed to keep workers safe from Hand Arm Vibration Syndrome has received another glowing piece of coverage in the construction press.

Industry news website Construction National ran a feature on how the HAVmeter technology had played a major role in the M74 Completion project – a major transport scheme aimed at creating a new arterial route in Glasgow.

The HAVmeters – which monitor exposure to vibration levels – have been used by  dozens of workers on the scheme to prevent injury when using vibrating tools. The technology has also proved its resilience during the project, after one of the meters was lost in a snow filled crevice for two months – and workers found that it still functioned despite being subjected to sub zero temperatures.

The full coverage can be viewed on Construction National’s website and was the result of a sustained PR in Scotland campaign by the Holyrood PR.