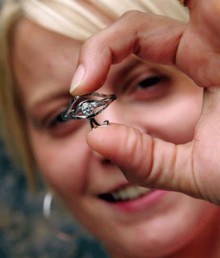 A MOTHER who commissioned a ring in the shape of an ancient protection symbol was stunned when it mysteriously lit up.

Helen Dewar asked one of Scotland’s top jewellers to produce the ring in the shape of the legendary Eye of Horus from Egyptian mythology. The Fife mum-of-three believes the design has the power to protect the wearer from bad luck – so she was spooked when the diamond set in the centre of the ring suddenly lit up with an eerie blue light.

She said: “I was completely taken aback and didn’t know what to think. I’m not hugely superstitious but I do believe there has to be something at work to make this such a powerful symbol for thousands of years.

“When my new ring suddenly started glowing with this very strong blue light, I was really taken aback and just staring at it wondering what was going on.”

The incident happened while Helen was on a night out in Dunfermline with friends and she quickly realised the ultraviolet light in a bar was making the diamond glow.

She added: “I’d never heard of diamonds lighting up under an ultraviolet light and neither had any of my friends. That got me worried that maybe there was something wrong with the diamond.”

Helen, who lives in Pitteuchar, Glenrothes, with her three children Declan, seven, Danielle, five and four-year-old Sophie, returned the ring to the Edinburgh Shop were she bought it, Alistir Wood Tait Antique and Fine Jewellery.

Owner Alistir Tait, one of Scotland’s leading goldsmiths and gemmologist was quickly able to solve the mystery – and revealed the stone was an unusual diamond which fluoresces under ultra violet light.

He added: “The majority of diamonds show absolutely no effect under UV light, but a small number actually glow. This particular diamond reacted as strongly as any I have ever seen.

“Not only does it fluoresce very brightly it also phosphoresces – that means when you switch of the UV light in a darkened room it will still glow a yellowy-orange for five to 10 seconds.

“It’s very, very unusual and I’d say you’d be extremely lucky to find one in a thousand diamonds which lit up as vividly as this one does.”

Despite being unusual, the UV-reaction has absolutely no effect on the value or quality of the diamond, though Alistir did admit to feeling a tingle up his spine when he saw the effect.

He added: “Gemmologist use small UV lights to check the authenticity of certain gemstones, but there is no reason for a jeweller to check a diamond in this way.

“The only reason I selected this diamond from my stock was because it was the right size and cut – the fact it lights up like this is just a very unusual coincidence.

“I have to admit, the effect of seeing this ancient eye symbol light up like this is very eye catching and I can see why Helen would have been a bit unsettled by it.

“However, once I was able to assure her it was simply because of an unusual quality in the stone, she was delighted with the effect. So that is a bit of good fortune that it has all worked out so well.”

Helen, first came across the Eye of Horus design during a trip to Egypt last year. She was smitten by the image and the centuries of history attributing it with powers to ward off evil and bad luck.

She subsequently read more about the design and decided to have the ring made as a good luck charm – she also plans to have a pendant made for her daughter Danielle, who has cystic fibrosis.

She added: “When you have a child with a serious illness it puts everything in a different perspective and I don’t think there is anything wrong with looking for lucky charms or symbol to help you cope and feel more positive. People like the idea of a guardian angel looking out for them.

“I had a small tattoo of the Eye of Horus done after my first trip to Egypt and certainly since then I have had a much more positive outlook on life and I don’t seem to have suffered the same bad luck.

“I’m not saying that it is down to the power of the symbol, it might just be because it helps me feel more positively about everything. Either way I really like the design, I love the ring Alistir designed for me and I am totally thrilled by the way it lights up.

“The fact this diamond was chosen by chance feels like a bit of good luck in itself. The effect when the diamond glows is magical. I can thank Alistir and his staff enough.”