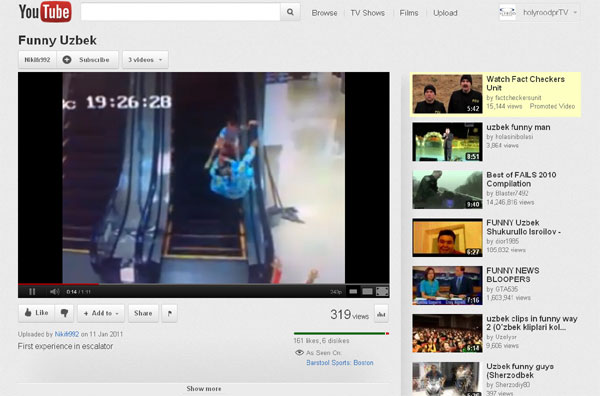 Do our links get you in the festive spirit? Tell us on our Facebook and Twitter pages.

EVEN SANTA HAS AN IPHONE 4S

Apple, like most of the big companies have jumped on board the festive spirit to create a winter advert. John Lewis has the little boy who can’t wait to give his mum and dad their presents, Coca Cola have the infamous Christmas advert we all know and love and now Apple have hooked up their iPhone 4s with Santa. In this 30sec advert, Santa uses the phones app Siri to help him through the busy night and to show him where all the houses are. He even receives a text from Mrs Claus telling him to cut back on the cookies. A nice little festive advert with Christmas fast approaching.
http://www.youtube.com/watch?v=5qcmCUsw4EQ&feature=g-trend&context=G20bcc7fYTAAAAAAABAA

It seems that guys have been getting a bad rap for things they say when the girls are not much better. This hilarious video- acted out by a man may I add, is a brilliant look at what girls say on a day to day basis. Most seem to be asking questions like can you fix this or can you have a look at this. Very funny but sometimes true!
http://www.guardian.co.uk/commentisfree/2011/dec/16/shit-girls-say-boys

I never knew that getting on an escalator could be so difficult. You stand on the step and it takes you either to the top or bottom of where you want to go. It might be as we are from a time where escalators are everywhere and our generation know how to use the moving stairs. I would not, for one minute, think that there are still people who struggle with using this simple invention until I saw this video of men and women in Uzbekistan failing at standing on a step.

The video footage is taken from a CCTV placed just next to the newly built escalator. You can’t help but laugh at the poor, unfortunate shoppers as they struggle to get on the escalator.
http://www.dailymail.co.uk/news/article-2076215/Uzbekistan-escalator-video-How-getting-escalator-hilarious.html

You maybe thought you definately can’t beat a Christmas roast (although for me the best bit is the sausage feast) but when it comes in human form most would probably give it a miss. Poor sucker, Edward Baker entered the Darwin Awards on the 25 December 1998 after dying from excessive microwave radiation exposure. In the urban legend he was attempting to keep warm next to a telecommunications feedhorn and was literally cooked to death. For his Christmas shift, Baker reportedly brought a twelve pack of beer and a plastic lawn chair, which he positioned directly in line with the strongest microwave beam but they were also victim to the massacre and exploded.

This may unfortunately be an urban legend but for the morbid people out there, just ignore that information for your entertainment. It happened.
http://www.darwinawards.com/legends/legends1998-11.html

This cute video of a cat soothing a baby to sleep has become a Youtube hit after receiving over 60,000 views. The 1 minute 40 seconds clip shows Stewie the cat gently stroking baby Connar’s head sending him off to sleep after he wakes crying. The cat certainly gives Mary Poppins a run for her money and Connar’s parents will no longer need to argue over who tends to him when he wakes in the night.
http://www.dailymail.co.uk/news/article-2076287/Aaron-Grant-Hilarious-video-shows-cat-soothing-crying-baby-sending-sleep.html