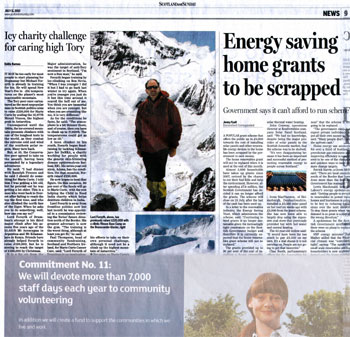 Renewable energy firm Solar Power Scotland has celebrated an impressive piece of Scottish PR thanks to the Holyrood PR.

The firm was featured in leading national newspaper Scotland on Sunday, which reported on how it had condemned a decision by the Scottish Government to scrap a renewable grants scheme.

The criticism came after the government announced an end to the Energy Savings Trust home renewables grant scheme, which gave homeowners 30% of the cost of installing renewable energy systems in their properties. The decision meant that anyone interested in taking up one of the deals has just weeks to make an application for a grant.

The full coverage can be viewed on the Scotland on Sunday website and was the result of a sustained PR in Scotland drive by Holyrood PR PR in Scotland.