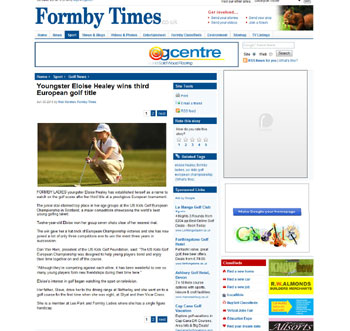 The U.S. Kids Golf European Championship has received another impressive piece of coverage in the UK regional press thanks to Scotland’s PR experts.

The tournament was featured in the pages of the Formby Times, which reported on how young competitor Eloise Healey had stormed to vicotry against an international field of competitors.

Liverpool youngster Eloise beat players from across the world to emerge vicotrious in her age group at the competition in East Lothian. The victory marks her third successive European Championship triumph and has earned her a place at the prestigious World Championships in Pinehurst.

The full article can be seen on the Formby Times website and was the result of a sustained PR in Scotland campaign by Edinburgh public relations experts the Holyrood PR.

Double Milestone for one of Scotland’s Top Personal Injury Lawyers