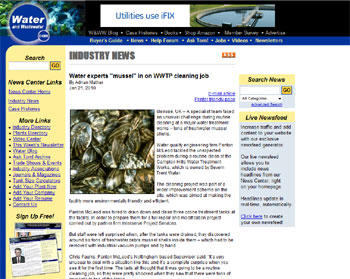 Water and Wastewater, which is read by senior officials and figures in the UK water industry, reported on how the firm had cleaned more than 5 tonnes of zebra mussel shells during a recent cleaning project.

The work took place in Leamington Spa for Severn Trent Water, where Panton McLeod were called in to clean a series of ozone tanks at a major water treatment works. However, after they discovered the shells were blocking one of the tanks, their specialist teams had to scoop out tonnes of mussels before the clean could begin.

The full article can be viewed on the Water and Wastewater website and was the result of a sustained Scottish PR campaign carried out by Holyrood PR public relations in Scotland.