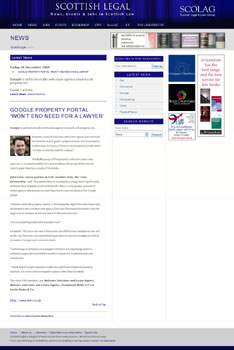 Edinburgh’s leading group of property solicitors – the ELPG – has been celebrating after securing new headlines in a prestigious legal publication.

The group, which consists of Warners, Neilsons, Drummond Miller, the Lints Partnership and Leslie Deans & Co, was featured in the Scottish Legal News bulletin after responding to questions over the threat of internet search giant Google on the property market.

The ELPG’s response came after Google announced it was considering entering the UK property scene with a house listing site similar to that of Rightmove. However, ELPG member John Lints said that the internet company’s plans would have little effect on the Scottish property market, as people in Scotland tended to use property solicitors to sell their house rather than estate agents.

The full article can be seen on Scottish Legal News and was the result of a dedicated media strategy maintained by Holyrood PR PR in Scotland.