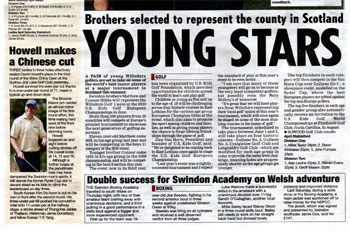 The U.S. Kids Golf European Championship has been featured in another regional newspaper thanks to Holyrood PR PR in Scotland.

The Swindon Advertiser reported on the tournament in their most recent issue, to show how brothers Matthew and Connor Hibbs would be going for glory during the 3-day event.

The championship is one of the highlights of the junior golf calendar and will see hundreds of youngsters from around the world competing on the links in East Lothian this June. Entrants will also be battling it out for places at the prestigious U.S. Kids Golf World Championships later this summer.

The full story can be read on the Swindon Advertiser website and was the result of a sustained public relations campaign by Holyrood PR PR in Edinburgh.