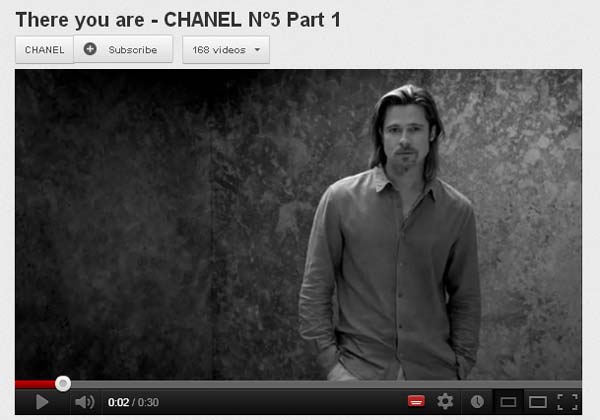 We’re always on the hunt for news of the bizarre, funny, controversial, inspiring and straight down geniusness-so get sending on Facebook or Twitter!

There has been a flurry of commentary on Chanel’s latest advert for their most famous scent, Chanel no. 5, as, for the first time ever, it features a man. And not just any man either, one of the world’s most famous male faces, Brad Pitt. And I have to say, Mr Pitt look son top form. His long hair is not to my taste, but he delivers his lines with poise, and that sexy, gravelly voice is one I could never tire of listening to. However, I am still not quite sure it works; I understand the principle, I like Pitt, but I am pretty sure is doesn’t make me want to buy the perfume.

As well as being Breast Cancer Awareness month, October has seen young breast cancer charity Coppa Feel take its next move into traditional advertising. Gavin and Stacey star Mathew Horne lent his voice for the new advert being screened in cinemas across the country where he encourages ladies in the cinema to take a feel of their breasts. I actually got the chance to meet the young founder of the charity Kris Hallenga last year at T in the Park. She has been a real inspiration to young women across the country after battling a fight with breast cancer herself and I think will continue to do so if she and others keep pushing the boundaries.

Given that this year the office are going to be dressing up for the spookiest day of the year’s calendar – Halloween – I thought it might be a good idea to start brushing up on some costume ideas. During my search I stumbled across ’13 Terrifyingly Realistic Halloween Make-up Jobs’. Let me just say now, there is no way I will have access to the skill or inclination to go to the lengths these people did – but it certainly gave me some perspective! From someone who’s face appears to unzip down the middle, to a very realistic zombie, already well decayed, these pictures will inspire, and probably scare, most of you.

Buckfast, like Irn Bru and deep fried Mars bars is the stereotypical diet of Scots whether we like it or not, through association in popular culture. Edinburgh firm, Elixir Brew Company is set to take the fortified wine to the masses with their new creation, which they claim is the world’s first Buckfast beer. It has been named ‘Benedictine Groove’ after to the monks who invented Buckfast and not pack quite as strong a punch as the original, at just 5.5% alcohol. The beer has hints of caramel, port and spices along with a caffeine kick and is described by its inventors as ‘delicious’.

It’s Monday, a day of hatred for many, so I thought I’d try and inject a belly laugh into your day and we’re going old school! Hailing back to a British comedy classic from the surrealists of Monty Python with their take on pro football! Replace Nikos Anastopoulos with Plato and Bastian Schweinsteiger with Immanuel Kant and what do you have? A scene of pure genius!